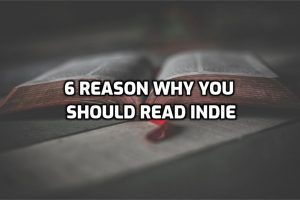 There are many reaons why you should read indie books. A few days ago, I was having a discussion with one of my friends (I’m proud to say, I have more than one) about indie authors vs traditional authors, and I came to the realization that I much prefer indie books over traditional ones. That to me was interesting as my friend told me “I tried to finish a book once, but couldn’t. That’s why I think reading isn’t for me.”

That is just plain false. It’s never your fault a book didn’t grab you enough to finish it. Think of it as school; you never blame the students (this is how it should be anyway) it’s always the responsibility of the teacher to make sure students receive the information in an efficient manner. Indie authors spend way more effort, and are probably more business-savvy than other authors, that’s because they wear many different hats throughout the writing process. So here are 6 reasons why you should read indie books.

There’s something that is just mystical about indie books. They’re unfiltered by the demands of publishers or anything even remotely close to it. An indie book is just that: an independent book that stays true to the writer’s vision; therefore you get the entire vision of the writer. In most cases, writers often write the books they want to read themselves, that’s why they’re always invested in telling the story to the best of their ability.

Have you ever heard of write to market? When you invest in an independent book, you can rest assured that the author is not only invested in the story, but they’re more than likely to do what they want, without fear of a company rejecting to publish the manuscript if they don’t remove sections/characters/elements. There are so many stories that almost never reached readers precisely because of that reason (Harry Potter? Almost didn’t make it to print).
There are just far too many stories about absolute gems that almost never made it. Ask yourself this: what about the ones that we didn’t hear of? What about the ones that were left on the slush pile? Whenever you give the creator the freedom to do what they want, it’s almost certain that they will push the boundaries of what is possible and take it much further than that.

There are so many rules when it comes to writing, marketing and publishing. The industry isn’t kind to those who try to enforce their own rules. Luckily, indie authors have technical rules they need to follow (get an ISBN…etc) these things -thankfully- never compromise or interfere in the creative process. That is why indie books are more likely to challenge the norms and in return, you get an adventure that is unique and doesn’t fit a certain mold the industry deemed successful.

This might not seem that important, but indie authors rely on communication with their readers and fans to keep their heads above water. Even the simplest message can reach them and it’ll make their day no matter how little effort is put into it. Most authors are usually one thought away from quitting, it’s a normal thing but most readers naturally assume that they must be showering in positive feedback and messages… the truth is the exact opposite.
A very small number of indie authors receive any kind of encouraging messages, and the only “feedback” they hear are from people who portray them in a negative manner -constructive is fine, destructive is not.
These often come from competition, people who have a bone to pick with them, online trolls and even a crazy ex (I remember reading about this somewhere). Of course, it happens that someone will pick their book and not enjoy it, and they will leave a comment or sometimes make sure their opinion is heard and that is perfectly fine as long as it remains objective. Talk about the book and not the author. It doesn’t matter that English isn’t his native tongue, so if you somehow incorporate that in a review: you’re an ***hole.

When it comes to the publishing world, Amazon generally takes the cake. Especially since they control the majority of the ebook market. And Amazon loves reviews. The algorithm feeds on it, and that is precisely the determining factor that contributes to a book’s success or not. Imagine if the world’s most successful and beloved author published a book, but because no one reviewed it, Amazon’s algorithm didn’t pick it up, it didn’t reach any readers, the author quit because he there was little to no interest or it just wasn’t viable to be an author anymore. How to change that? Very simple. If you read the book, just leave a review! It doesn’t have to be positive, every review counts.

I don’t know about you but I hate when companies stretch a book or a movie far beyond a reasonable conclusion, and decide to just have another sequel because it’s just a “cash cow” for them. Sometimes, a book or a movie (even games sometimes) are planned and executed to perfection.

That’s because that was always the plan, but suddenly things just take a turn for the worst (Game of Thrones, anything past season 3 anyone -which is exactly when the show ran out of material) and that is because the author’s work is either being ignored or that he hasn’t written that part or that aspect yet. This becomes apparent because when a writer plans a book, he dots down the outline (and some of them outline the entirety of the series because they want to ensure readers/viewers get the story as it is).

Many indie authors refuse to put up another sequel; because it just wasn’t planned to be. “The book ended perfectly, anything else, and it would do the story a disservice.” is what they are most probably going to say.

4 comments on “6 Reasons Why You Should Read Indie Books”