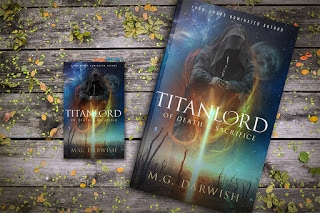 It’s been a while haven’t it? Well, it’s been about a good amount of time since Titanlord has been out however recently, Espie of OnlineBookClub has written a great and in depth review about Titanlord and since it can be tough to find it, I will post it here along with a link to the original page on OnlineBookClub.

P.S: The errors mentioned are fixed and live on Amazon (both Paperback and Kindle editions).

Following is an official OnlineBookClub.org review of “Titanlord” by M.G. Darwish

People thought seven Titans existed. Others said they were fewer than that; some claimed there could be more of them. What had been more definite was their unmistakable otherworldly power, which was said to be rivaled only by the gods themselves. Even the bravest and staunchest fighters cowered in fear; one could only imagine what could strike anything or anyone that stood in the mighty ones’ way. With all the varying tales and stories about them, they embodied the very essence of the Supreme Architect — the creator of all beings and things that ever existed.

Everything changed when a mortal king defeated and absorbed the Titans’ powers. The Capital then had become so stable and unperturbed, with nothing and nobody to challenge its stature. For hundreds of years under the ruling dynasty, its walls and forts remained safe and unmarred by any foe’s weaponry. Even the rebellion had already been quelled. Everyone within the realm had become as complacent as could be. However, should they be?

The present king, Magmar the Thirteenth, already had qualms that the most recent news had been too good to be true. As he sensed, indeed, the famed or infamous Red Hand was still on the loose. They were quite far from a happy ending. It was just the start of more perilous times.

Titanlord: of Death & Sacrifice is a fantasy novel by thriller writer M.G. Darwish. The author says his fear of a penguin revolt is immensely greater than what he’d feel for villains and monsters of any sort. That should say a lot about this work. Although some sources show that this piece has more than 3,000 pages and 750,000 words, don’t be too daunted by the length because its e-reader version actually only has 319 (yet power-packed) pages. Expect the unexpected more.

Do you crave for the thrill and mystery of the Lord of the Rings trilogy but don’t mind the absence of hobbits, elves, dwarves or orcs? Do you fancy the awe-inspiring ancient mythology that donned the Clash of the Titans movie or the Percy Jackson series’ stories but also want something on a different league of its own? If yes, then this book’s storyline — and all else beneath and in between — could also be for you. With cliffhangers in almost every chapter, it never failed to keep me guessing about what could happen next. Just when I thought I already knew the answers, a subsequent chapter would then lead me to discover that I didn’t get everything exactly right. I had to find another piece of the puzzle thereafter.

Who had been telling the truth? Who had been keeping secrets? Who should they trust? Who were the real enemies? Were all the armed struggles justified or were they just causing more harm than good? Who should they turn to? Who should they blame? Should it be the Titans, the king, the Red Hand, the bandits, the demons or the gods? Would there be any hope for them? I really needed to keep on turning one page after another to satisfy my piqued curiosity.

It had taken a while before the main character graced the limelight. Nonetheless, all other previous chapters built everything up on a steady pace enough to prepare me for when that right time came. Did I find a protagonist or an antagonist? Well, I was reminded of the adage that “one man’s hero could be another’s villain.” The words rang so perfectly relevant in the Red Hand’s case along with the other characters’. Through vivid descriptions and variations in dialogues, each character had been well developed enough.

Such deftly approximated the reality that each human being is uniquely made; everyone has inherent good and bad sides, and yet that fact isn’t totally bleak. For instance, I really disdained a character’s obscene language that was quite unsuitable for younger readers. Despite that, I soon found out that the Imperial Captain was more than what he initially seemed to be. In as much as I have rooted for the popular heroes and heroines, there were more twists and turns to the story. Contrary to what they had appeared to be capable of at first, the ones I relegated may have had a bigger role to play. As I read further — and on several occasions — I realized that my preconceived notions and biases got the better part of me. I didn’t mind being wrong either.

The utter heartlessness and grossness of the wanton deaths in the story had been so distasteful. In spite of that, they even made me admit that they were not entirely fictional at all. Such atrocities really existed and may still be existing in today’s reality. Others may even try to justify them; nevertheless, those who suffer and the ones close to them would always choose if not beg to disagree. Love, friendship, innocence, leadership, integrity, loyalty, trust, faith, service, respect, equality, harmony, peace, and courage — these were some of the important values and themes that I gleaned along the way, too.

I should have easily given this piece a perfect rating if not for the sporadic typographical errors on its pages. I am giving it only 3 out of 4 stars at this point. However, it could soon rise and claim the coveted realm of literary glory. Those albeit minute yet still significant details just need to be banished into oblivion for good.

Before I wrap this up, I’ve also got a confession to make. I might have been compelled by something, but I’d acquiesce anyway. This book’s sampling already hit me straight at the center of the target’s bullseye. You’re only reading this because I found worth in what I read in the first place. It may have been written by a thriller writer, so it may have seemed so unlike “me.” Yet it wasn’t classified under the crime, mystery, thriller or horror genre; thus, I decided to give it a full go. That turned out to be a dread-defying and impulsive yet serendipitously fruitful decision; I didn’t and wouldn’t be able to regret making the choice.

Tastefully written yet in plainer language than expected, Titanlord dealt with ironies and paradoxes, took me to its perplexing world of myths, and challenged me to navigate my way through. I also unearthed the following among many other trinkets of wisdom from the manuscript: “It is often said that what makes one brave is not whether or not fear exists in your heart, but what you do with the fear in your heart.”